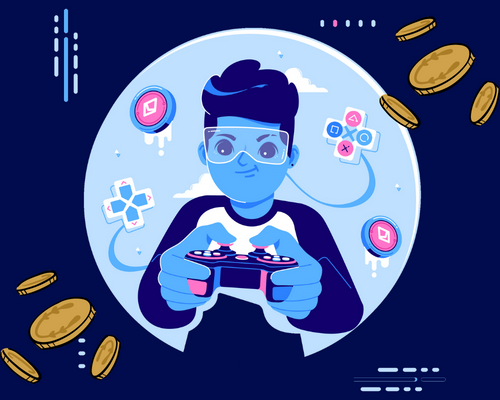 It’s certain that NFT games is a futuristic business idea that everyone should stick to for making revenue. Ever since its launch, the NFT gaming platform never fails to grab the attention of the gamers & investors.

2021, was an incredible year for NFT games, the performance of this industry was sky-rocketing. Revenue trends was peaking by providing extensive support for the gamers in terms of features integration, performance, smart contract integration, open to transparency, etc,..

As of 2021, the sales of NFT Games hits $5.17B. Its sky-rocketing sales convinces new business players who thinks of taking NFT gaming as their mainstream source of revenue.

Being a dominative business model, this sector continues to flourish in 2022. As the day passed by, more games started evolving in the NFT sector. Numerous fascinating projects are set to get released in this last quarter of 2022. As a result, NFT Games takes up the ultimate trending place, by releasing new NFT gaming projects.

According to the report released by the global research team, the NFT Gaming market worth  is expected to hit $231 Billion by 2030. Many reports says, this sector is predicted to grow by a 33.7 percent compound annual growth rate in the next eight years. Stats like this assures the inevitable growth is vital in the upcoming years.

Curious to enter into the NFT Gaming stream?

Never miss out to check this revenue making ideas in gaming. This blog explains, “The way you could make revenue in this NFT Gaming industry”.

Actually there exists two sets of audience who likes to make money with NFT Games. One is gamers and the other one is investors.

Gamers can move one step ahead by making revenue with NFT games. Some non-stoppable ways are here for you,

1. Earning from in-game currency
In-gaming currency can be swapped for other cryptos. A player should wait and switch on the gaming mode just after ensuring your in-game characters works to clear the gaming level.

2. Tournaments and events
It turns out to be a big opportunity for gamers to earn unique rewards from participating in games. Once a tournament is active, a player who is on top of points is rewarded with special rewards.

3.Breeding
Games are not just for battling and earning via rewards. Breeding is another method to earn revenue. For breeding a gamer initially requires the need to learn, how to breed the top-tier valuable in-game characters or collectibles.

Breeding differs from game to game, and as a result new valuable NFT characters are produced. To get started with breeding, a significant initial investment is required.

4. Minting new items
Players can create any 3D gaming objects, wearables and other collectibles for earning royalties by minting new items like these.

A gamer must initially create a new item with the support of editing/ creating tools. Their earning capacity is based on their scored royalty percentage.

5. Staking tokens
Players can now lock their token and stake for earning. It is the simplest idea for making money out of staking.

A token is locked for a specific period of time and released for others to make an exchange. By doing so, a passive revenue can be earned.

6. Trading NFTs
Trading NFTs is a key idea for earning. Gaming assets can be traded via buying and selling options. Based on the rarity level, abilities, utility, attributes, a player earning is based on it.

7.Mining
This method may not be suitable for everyone. Usually a mining phase begins initially at the immediate release of a new game. Mining takes place by starting the process of adding new gaming currency into circulation.

1. Invest in Promising New NFTs Early
From the investors point of view, one of the best approaches to earn with NFT Games, is to invest into the NFT gaming asset at the earlier stage. Your asset will have a potential to earn big at the later stage.

2. NFT HODLing
Another reliable approach to earn money via NFT Games, is by HODLing gaming avatars. This investment strategy can be a great way to make money in this 21st century. Instead of selling an avatar one can prefer HODLing option for earning.

3. Flipping NFTs
Flipping NFTs is an effective way for earning in this sector. One can buy an NFT instantly and sell it immediately for earning. This method of immediate buying and selling of NFTs is called flipping.

4. Earn Interest on NFT Gaming Rewards
It is a popular & indirect approach for earning revenue from reward programs. A rewarded token can be stored into the savings account, for generating annual yields.

5.Invest In Companies With Exposure To NFTs Gaming
Buying stocks in the companies who are exposed to NFTs is a brilliant idea to get started. You can invest in those companies, who have an exposure to the NFT Gaming market.

6. Generate Royalties
A NFT creator can fix their own royalty percentage, and that means that any secondary market sales will provide the original creator with a payment. Based on the sales an investor too earns money from it.

As NFT Games provides a tremendous source of passive income, both the gamers and investors can move forward to set their footprint in this industry. Initial phase to start over is from getting strong support from NFT Game Development Company.

Developers steps forward to create a gaming platform that is supportable for Android and iOS devices. With their alluring features and assistance one can successfully deploy a NFT Gaming platform. Entire tech support is offered for the gamers and investors who are struggling to earn from this industry.

Other services we offer,